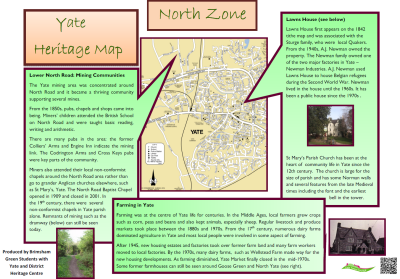 The North Zone map is sited in Brimsham Park.

Want to know more? On the rest of this page, you'll find extra background information researched by students at Brimsham Green School.

Farming has been at the centre of Yate life for centuries.

In the Middle Ages local farmers grew crops such as corn, peas and beans and also kept animals, especially sheep.

There were markets during Medieval times and weekly markets from the 1870s.

By the 1700s, dairying dominated local farming in Yate; and most local people worked in agriculture.

During both world wars, the government encouraged farmers in Yate and elsewhere to produce as much food as they could to meet production targets.

After 1945, new housing estates and factories took over more land and fewer people worked on farms.

By the 1960s, dairy farms in Yate had almost disappeared and in the early 1970s the market ceased trading.

Before the 1960s, traditional fox hunting was generally popular with local land owners, but some farmers were worried that the hunt would create damage and restricted access to their land.

Today, a few working farms remain in the North of the Parish.

From the mid 19th century, the Yate mining community was concentrated around North Road.

Miners' children attended the British School on North Road and were taught lessons in the 3 "Rs" - Reading, Writing and Arithmetic.

In earlier decades, local children worked down the mines to support the family.

There are many pubs in the area: The Colliers' Arms and Engine Inn indicate a mining link.

Miners were encouraged to attend local non-conformist chapels around the North Road area rather than going elsewhere to grander churches, like St Mary's.

Miners stayed in the North Road area; a thriving working class community grew up in this part of Yate, centred on local pubs, chapels and shops.

Lawns House first appeared on the 1842 tithe map and was associated with the Sturge family, a local family of Quakers. 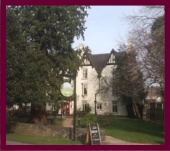 In the late nineteenth century, the Hitchens family acquired the house; by the 1940s, the Newman family owned the property. The latter were owners of one of the major factories in Yate.

Ridgewood and the Sodbury Union Workhouse

The Sodbury Union Workhouse, known as Ridgewood since 1948, was for much of its history an unpleasant place to be.

During the 19th century and early 20th centuries, the workhouse was a place of last resort and humiliation for people, regarded by the authorities as "undeserving".

Men, women and children were housed separately and their possessions taken from them; their families were most likely to spend most of their lives there.

In the 19th century, men had to do onerous work and break boulders into "mouth-sized" stones for repairing roads; they also maintained the buildings and gardens.

Women cooked, cleaned and worked in the wash house.

Punishments included being locked up without food and water for set amounts of time.

There was also rumoured to be a ghost haunting the house.

After 1948, the site was used for residential care and from the 1970s has offered all manner of education and community facilities.

Click the links below to read more about the West and South zones of the Heritage Map, or to return to the introductory page.