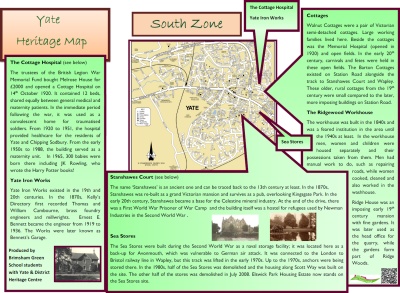 The South Zone map is sited in Kingsgate Park.

Ready to delve deeper? See below for more historical facts and figures put together by students at Brimsham Green School.

The Sea Stores at Yate was built during World War Two as a naval storage facility away from Avonmouth which was vulnerable to air attack.

It was connected to the London-Bristol railway line in Wapley, until the early 1970s when this track was taken up.

The Sea Stores was then served by Kennedy Way, originally just a road to the Sea Stores, but later a major road through Yate.

Through the post-war period anchors and chains were stored there as well as rows of council snow ploughs in the 1970s.

In the 1980s half of the Sea Stores was demolished and housing along Scott Way was built on the site.

The other half of the stores remained until July 2008 when the buildings were taken down.

The trustees of the British Legion War Memorial Fund bought Melrose House for £2000 and opened a Cottage Hospital on the 14th October 1920.

There was a war memorial panel in the hall dedicated to those who died in World War 1(now at Yate Heritage Centre).

The Cottage Hospital provided general healthcare from 1920-1951, for Yate and Chipping Sodbury residents.

The building continued to provide day care and support for the mentally ill and young people into the 21st century.

Today, it is owned by a local church organisation.

The Cottage Hospital building was originally called Melrose House in the 1850s.

Following World War I, there were pressures to have more hospitals and provide a better life after the horrors of war.

In 1951, the Cottage Hospital became a dedicated maternity centre and general patients went to Frenchay Hospital.

The maternity hospital proved very popular and was regarded as preferable to home births; people booked beds at the hospital months in advance.

In 1965, 300 babies were born there including JK Rowling, who wrote Harry Potter!

During the 1940s, local businessman Dick Febry set up a lorry business here, which emerged as a successful coach hire firm.

The Febry's Sodbury Queen coaches graced the roads of Yate, Sodbury and beyond for many years.

Febry's transport business continued on the Iron Works site into the 1980s.

Ridge House was one of a handful of imposing houses in the built 19th century parish of Yate.

The house was built in the early nineteenth century and is noted as a "Ridge House and Pleasure Gardens" on the 1842 Tithe Map of Yate.

The house was owned by the Burges family for many years.

Colonel Burges was instrumental in developing splendid gardens on the Ridge Estate in the 19th century, some of which form part of the current Ridge Woods.

Colonel Burges had the Ridge Lodge on Station Road built in 1883 for his gardener.

The lodge remains the only wholly intact building of the old Ridge estate.

Ridge House was much altered from the 1920s after Sodbury quarry took over.

The site of the house remains offices for Sodbury quarry.

Walnut Cottages were a pair of semi-detached Victorian cottages.

Opposite the cottages and the Memorial Hospital were open fields until 1930, when the Ridge estate began to be built.

Before 1939, carnivals and fetes were held in the open fields opposite the cottages.

The Barton Cottages were a group of cottages alongside the track to Stanshawe's Court and Wapley.

These cottages were small compared to the buildings on Station Road.

Click the links below to read more about the North and West zones of the Heritage Map, or to return to the introductory page.